Is This Weird Miracle Bean The Newest Superfood?

Technology and scientists have figured out a way to utilize that wonderful red fruit from the coffee plant and all its beneficial properties.   The fruit of the coffee bush is this red fruit that contains the coffee bean.  Many knew that there were a lot of nutrients within the fruit as well because, like many plants, the nutrients are distributed throughout the entire plant and not just in a seed. 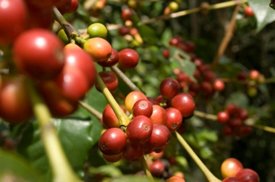 There are many new health benefits being observed and researched by scientists, and a company has taken much of this information and developed a way to utilize the entire coffee fruit.  They call it Coffeeberry®, and it contains much higher levels of important nutrients than conventional coffee.

Coffeeberry® is full of phenolic acids, which is a powerful antioxidant.  How Coffeeberry® gets such a high level of phenolic acids is because of the intense sun’s rays the fruit receives.  The Coffeeberry® fruit grows in high altitude, low latitude regions of the world where the sun’s rays are strongest.  As the plant matures and grows this bright red fruit, it has to develop these powerful antioxidants to protect the fruit from the damage caused by the powerful doses of the sun’s radiation and photosynthesis.

The U.S. Department of Agriculture's Center for Aging at Tufts University measured the Oxygen Radical Absorbent Capacity (ORAC) of more than 40 fruits and vegetables.  Compared to the USDA’s measurements, a 1 gram serving of our CoffeeBerry ® Forte Extract provides the same antioxidant-free radical power as 459 fresh blueberries, 81 medium strawberries, 647 raspberries, or 1015 grapes!

Coffeeberry® contains healthy polysaccharides such as mannans and arabinogalactans, as well as five of the eight essential monosaccharides.  There are two very important things with these nutrients.

One is that conventional roasting destroys mannans and arabinogalactans, and they are not found in traditional coffee.  The second thing is research and emerging science has shown that eight carbohydrates, Mannose, Galactose, Fucose, Xylose, Glucose, Sialic acid, N-Acetyl Glucosamine, and N-Acetylgalactosamine are basic building blocks of all biological communication.


These eight monosaccharides, scientists believe, are essential in order for your immune system to function properly.  The five monosaccharides that Coffeeberry® releases during digestion are Mannose, Galactose, Fucose, Xylose, Arabinose, and Glucose.

As you can see, drinking conventional coffee may have its benefits, but in reality you are missing out on something way more powerful by not consuming the entire coffee fruit.

We use Coffeeberry® in our Longevity because of its powerful beneficial effects on your immune system and its ability to destroy free radicals that cause damage inside your body because of its high ORAC value.  We also included other specific nutrients to create a very powerful antioxidant combination that has a very high ORAC value, which gives you the best opportunity at destroying free radicals and staying disease free.

Click Here For The MOST Powerful Form Of CoffeeBerry >>