The Truth About Stevia


It’s no lie: Stevia is the new low-calorie sweetener on the block and everyone is raving about it.


But, what is it and is it safe? Can you consume it and help win the battle of the bulge?


Here’s what you need to know:


Lately you may have seen TV commercials claiming Stevia to be “all-natural” and not artificial like other low-calorie sweeteners.


Well, this in fact is true.


Stevia itself is a small perennial shrub that habitats areas of the southwestern United States to the Brazilian Highlands. 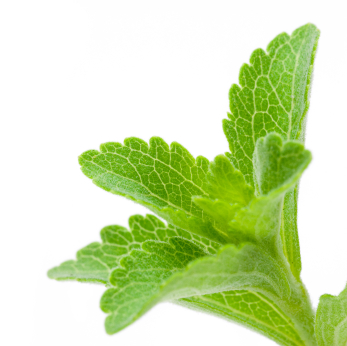 It’s a semi-humid subtropical plant that can be grown easily like most other vegetables, even in the kitchen garden.


The leaves of wild Stevia plants contain several different natural glycoside compounds including dulcoside A & B, rebaudiosides A-E, steviolbioside and stevioside – these are the compounds responsible for producing the sweet taste sensation.


Other chemicals with no sweet taste are also found in Stevia species and some even taste bitter.


The sweet Stevia extract is similar to other non-nutritive sweeteners, such as sucralose, in that it has zero calories, is 200-300 times sweeter than table sugar, is non-fermentable, and does not contribute to dental caries or plaque.


Some people experience a bitter aftertaste when consuming products with Stevia sweetener in them. This bitter taste is due to the presence of essential oils, tannins and flavonoids which are similar to the compounds that make tea and coffee bitter, but give them their therapeutic potentials.


Stevioside and rebaudioside A (or Reb A) are partially responsible for the aftertaste, with Reb A contributing less than stevioside.  Reb A is usually the Stevia extract you will find on store shelves.


Due to this bitter taste, many Stevia leaf products on the market today also contain other lower-calorie sweeteners (like erythritol and maltodextrin) to cut out some of this not-so-pleasant taste. These added agents also prevent caking of Stevia, because alone it tends to be very water-loving and will clump.


In Japan, artificial sweeteners were banned some 40 years ago, so Stevia has been chosen mostly to sweeten their food and beverages. The Japanese have performed over 40,000 clinical studies and found Stevia to be safe.


Stevia is suited for both diabetics and people with phenylketornuria (PKU), and no allergic reactions seem to exist.


It’s also been tested in person’s with hypercholesterolemia: 20 women were given a 20 ml extract of Stevia in water and in response their levels of total cholesterol, triglycerides and LDL were reduced, while HDL was increased (Sharma & Morge, 2007).


Therefore, the effects of Stevia are more desirable than table sugar which increases blood triglycerides and can often lower HDL (good cholesterol).


It more recent years, the beneficial effects of non-nutritive sweeteners such as aspartame and sucralose have been under question.


Some studies indicate that aspartame reduces food intake and may assist with body weight control, while others state that it paradoxically stimulates appetite and causes even more desires for sweetness (Blundell & Hill, 1986).


In a recent investigation (Anton et al, 2010), Stevia was compared against aspartame and sucrose (aka table sugar) for its effects on blood glucose, insulin, satiety and food intake in 19 lean and 12 obese, non-diabetic men and women.


The participants were all fed the same breakfast on three separate days, followed by a pre-lunch and dinner meal of tea, crackers and cream cheese sweetened with either Stevia extract, aspartame, or sucrose.  20 minutes after their pre-meal, they were given lunch or dinner and their satiety and food intake was measured. Glucose and insulin were measured after all meals and pre-meals.


The results showed that Stevia and aspartame had similar effects on satiety and hunger compared to sucrose.  Participants did not eat more calories at lunch or dinner following the Stevia meal compared to the sucrose meal, even though it contained less total calories.


More interestingly, it was shown that glucose levels after the meals were significantly lower in the Stevia groups, compared to the sucrose group, and lower (although not statistically) than the aspartame group.


Insulin levels were also significantly lower for the Stevia group, compared to both the sucrose and aspartame group.


These effects on insulin and glucose have beneficial long term applications for body weight management and blood sugar control: Since insulin is a “storage” hormone and will drive unused glucose into fat cells, by keeping it lower and managing glucose better, we won’t deposit as much body fat compared to eating something that increases insulin and glucose more.


This also shows that Stevia may help to manage post-meal hyperglycemia, which is an important contributor to the development of insulin resistance and Type 2 diabetes.


When it comes to sweeteners, Stevia does have benefits over others: it has a long line of safety data to back up its use and it doesn’t pose any added risks for diabetes and insulin resistance possibly like some other sweeteners.


However, we all use too much sugar and sweetness in our foods as it is. From breads to jams to juice to tea, all of the foods we often eat are already loaded with excessive sweetness. If you don’t really need an added sweetener in your foods, just pass them up and enjoy the taste of the food the way that it is.


But, if you do enjoy a sweet addition to foods like protein smoothies or yogurt, Stevia seems to have your best health in mind.

Discover What Your Doctor NEVER Wants You To Know About Fish Oil..

Tragic News About Your Health

The Key To Lower Inflammation